Sex robots to become a reality 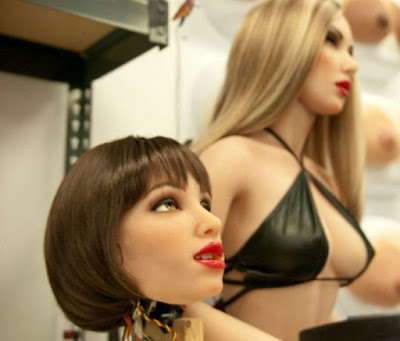 Robots designed to satisfy sexual desires are close to transcending fantasy to become reality thanks to rapid advancements in artificial intelligence, computing that allows machines to mimic human affects and high-tech sensors and materials. The technology has so far yet to cross the “uncanny valley” — the wide gulf from creepy to sexy sparked by almost-but-not-quite real humanoid robots.

But sex robots are already raising ethical, legal and moral questions of consent, sexism, human biases and what our desire for them says about human psychology. The debate over them highlights one of the more controversial aspects of the increasingly social nature of our interactions with robots as they move from factories into our homes and someday, our bedrooms.

“How we treat robots — it’s a mirror of our own psychology in a way,” said Kate Darling, an expert in robot ethics at MIT’s Media Lab. Darling is fascinated by our strange desire to anthropomorphize, or attribute human agency to machines, and engage with them in a social way. She studies human empathy for robots through the lens of violence toward them.

She cites the outpouring of sympathy for Hitchbot, a hitchhiking robot that was vandalized (or “killed” according to Twitter reactions), and calls to PETA about a four-legged Boston Dynamics robot who was kicked in a promotional video as examples of how our treatment of robots offer insights into the human psyche.

“The interesting thing is not the robots, it’s how robots reveal things about our own behaviour and psychology that we’re only just learning — including the question of whether sex robots are going to be a healthy thing or unhealthy thing for people.”

The questions being raised about sex robots are similar to the conversations about the link between violence in video games or pornography. However, the physicality of a robot brings such questions to a new level as the line between fantasy or reality becomes even more muddled in the subconscious, Darling said.

And even though we know they are machines, it doesn’t take much for us to treat robots as if they are people. Participants in one study even reported becoming more aroused by touching the “private parts” region of a humanoid robot, than when touching, say, the machine’s hand or eye. Others felt uncomfortable touching the machine in that way, a recent study by Stanford University found.

With an increasing amount of money being pumped into artificial intelligence and robotics and our growing comfort levels with robot interaction, it’s only a matter of time before we will love, marry and have sex with robots, believes David Levy, an artificial intelligence expert. Human-robot intercourse is the next sexual revolution and will be normalized by 2050, Levy predicted in his 2007 book Love and Sex with Robots.

“Once they move and speak and they feel warm, I don’t think there will be any problem for people to relate to them,” he said. “I think once one or two companies are actually producing these, I think the field will suddenly become very full.”