ISIS Tried To Sell Their Sex Slaves On Facebook 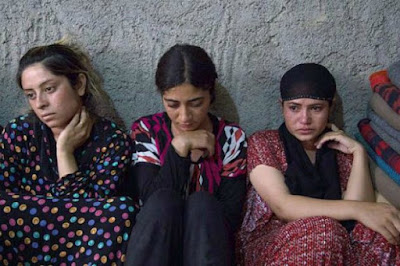 The dreaded ISIS tried to sell their slaves through Facebook, India Times reports. One of the posts reads, “Yay, or nay?” to bid for a “another sabiyah [slave], also about $8,000" Facebook took down the post within hours, but ISIS has many such women they can sell off at a moment's notice. The terror group's reign is said to be faltering after attack on the group by Iraqi forces, as well as Western forces.

Yet, true to form, ISIS fighters are trying to go 'by the book' in their dealings with sex slaves - they have elaborate rules about buying, selling, and having sex with girls - even if they are minors.

“We have seen a great deal of brutality, but the content that ISIS has been disseminating over the past two years has surpassed it all for sheer evil,” said Steven Stalinsky, the institute’s executive director, using the common acronym for the Islamic State. “Sales of slave girls on social media is just one more example of this.” “What makes her worth that price? Does she have an exceptional skill?” someone responds on a photo.

According to Human Rights Watch, ISIS has in their control 1,800 Yazidi women and girls, and claim that sex slaves are perfectly Quranic, in line with ancient Islamic traditions. “The longer they are held by ISIS, the more horrific life becomes for Yazidi women, bought and sold, brutally raped, their children torn from them,” said Skye Wheeler, women’s rights emergencies researcher at ­Human Rights Watch. “Meanwhile, ISIS’s restrictions on [non-enslaved] Sunni women cut them off from normal life and services almost entirely.”