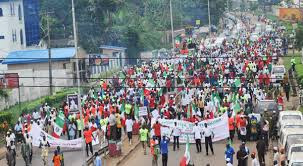 The Stand Up Nigeria (SUN) and a coalition of 50 other civil society organizations have commended Nigerian workers for shunning the strike being called upon by a faction of NLC describing it as a needless venture that was arranged to service the interest of a few minority.

National Coordinator of (SUN), Comrade Philip Agbese while reacting to the outcome of the meeting between the federal government and labour, he said it is obvious that patriotic Nigerians have resolved to support the current administration deregulation policy.


He said the action of the Federal Government at the first instance is in the best interest of the larger population of the people and no amount of intimidation should cow the President into submission.
According to Agbese, Nigerians have since realised that a strike action is not in their best interest, adding that the anti-deregulation proponents are economic saboteurs who are working against the interest of the generality of Nigerians.

Agbese said by standing on the side of the people and supporting the deregulation policy, Ajearo has shown that he is the true leader of the NLC and should lead the labour movement in Nigeria without any further delay.

He accused the Ayuba Wabba faction of not doing anything to protect workers rights. Saying “workers are being owed several months salaries and the NLC did not go on strike.”

He argued that subsidy only enrich a few and impoverished the larger population. According to him, the N1.2 trillion paid out as subsidy in 2015 budget, if properly invested in other sectors could have built more infrastructures and created jobs.

He said, “As I speak to the press tonight, we have received the casket that signifies the final death of “subsidy” which has been used to milk the resources of this country by a certain minute minority and it shall be formally interned by 2pm today in the full glare of the Nigerian media for all to see that this epidemic will never visit us again in the nearest future.”

He also commended the Trade Union Congress of Nigeria (TUC) who he said saw reasons and pulled out of the strike. According to him, more Nigerians trust the President Muhammadu Buhari administration to judiciously use the funds realised from removal of the corrupt subsidy regime to improve their welfare.
He however urged the federal government to quickly ensure that the palliative put in place to cushion the effect of the price increment are disbursed transparently so as to ameliorate the sufferings of Nigerians.