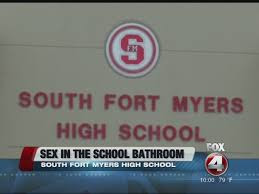 Sixteen South Fort Myers High School students have been disciplined after they were found to be involved in sexual activity in a restroom at the school last week, news-press.com reports. Lee schools’ spokeswoman Amity Chandler said the punishment ranged on several levels.

The discipline came on the heels of the discovery that multiple male students engaged in sexual activity with a female student in a restroom. Chandler said the punishments had been handed out and there were no more disciplinary actions pending.

She added that at the time the incident occurred, after regular school hours, there had been adults present in the hallway where the bathroom was located. "They did not go into the bathroom," she said. Additionally, reports that a school sports coach had entered the restroom and broken up the activity are not true, she said.

"That did not happen," Chandler said. Earlier this week Chandler did say that those who were directly involved in the situation numbered significantly less than 25. "Not every young man who entered the bathroom engaged in sexual activity," she said.

Meanwhile, the Lee County Sheriff's Office is checking into the cellphone video taken of the incident. "We are looking into a video that has surfaced," Lt. Jeff Dektas, public information officer for the LCSO, said."We're just investigating it like any other case."

Dektas was not able to confirm if the office had the  video or just computer screen shots from the mobile phone. The video came to light after being posted on social media and then taken down. The Florida Department of Children and Families is also involved in the case, spokeswoman Natalie Harrell confirmed.

"We are ... investigating the concerning incident that took place at South Fort Myers High School. We are working in conjunction with local authorities but our investigation is into the welfare and safety of the children involved," Harrell said in an email to The News-Press.

Principal Melissa Layner reported the May 17 incident  to the sheriff’s office’s school-based deputy, Jarrod Cantrell, the following morning. Using footage captured from a hallway camera, Cantrell "observed 25 male students go inside the restroom over the time frame of the female being inside the restroom," an LCSO report stated.

Layner spoke with the female student, who "confirmed that she had sex with a number of willing males." The cellphone video clips are a confirmation of the activity, clearly showing several young males engaged in sexual activity with a female in a restroom stall.