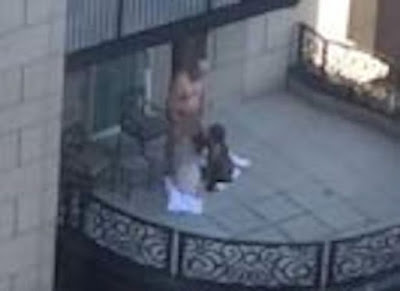 The shocking moment two women were seen performing a sex act on a man at a posh hotel has been caught on camera. The randy trio were seen getting down to business in full view of neighbouring buildings - including the group that filmed the incident in Chicago. Onlookers are heard gasping as the man and the women carry on with their X-rated show, mirror.co.uk reports.

One woman watching the scene unfold can be heard to screech: “Oh my god, she wants it.”
A male then replies: “This is great.” The footage has since been seen nearly 400,000 times after it was uploaded onto LiveLeak on Friday. According to the poster, the scandalous act took place at Chicago’s prestigious 60-floor Waldorf Astoria. The five-star hotel has more than 100 rooms and 51 condominiums.

The clip, titled 'Old man having fun on his balcony at the Waldorf Astoria' has drawn hundreds of comments.
People speculated the two women were, with many congratulating the man for the open-air escapades.
One commenter wrote: "Play on player" and another wrote "Living the life."
Posted by Olushola Otenaike at 8:30:00 AM