Teacher caught on video having sex with student in classroom 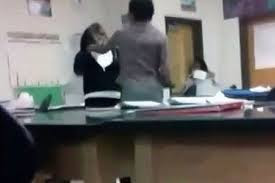 A college tutor has seemingly been caught out having sex with a female student in a classroom. Video footage of the not-so-romantic encounter has been posted online.


It’s thought the footage – which shows a naked woman with her legs on the shoulders of a man, is said to have been taken at the Changzhou University in China. The professor is being investigated for violating the code of conduct.

It was originally posted on Chinese social media site Weibo. It’s not clear who took the footage, which seems to have been taken through a classroom window.