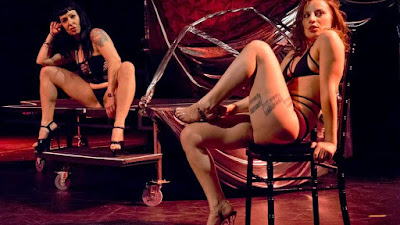 In a dressing room littered with towering high heels and black cutout underwear, an actor is getting ready for the evening's performance, but there's a big difference between this show and productions in London's West End  — the actor also happens to be a sex worker.


Night after night, a group of sex workers and their friends gather on stage in a fringe theatre in north London, baring their bodies and souls before an audience. Money is changing hands, but this time, people are paying to hear sex workers' stories told through the medium of opera.

The Sex Workers' Opera isn't designed to make the audience feel sorry for sex workers, but rather to challenge people's perceptions of those who do sex work and acknowledge that while some sex workers are coerced, others have made a choice. '

The position of the apostrophe in the opera's title is key, according to directors Siobhan Knox and Alex Etchart; it's "an opera that belongs to sex workers." Who is and isn't a sex worker in the production is something Knox and Etchart have worked hard to safeguard to ensure people can be involved without compromising their safety.

Mashable spoke with one of the actors — a sex worker who asked not to be publicly identified. "For me, the primary value in the play is in telling sex workers' stories, which the general public, and even the sex worker community, are going to be unaware of," says the actor.

The stories told during the performance don't necessarily belong to the cast you see on stage. As part of the production's creative process, Knox and Etchart did a callout asking for people to send in their experiences of sex work; be they good, bad or mundane. They amassed 63 stories from sex workers in 17 different countries; something which proved essential in ensuring the production doesn't focus on just one representation of sex work, or sex workers.

The creators of Sex Workers' Opera describe it as a social project, the members of which are "part of a marginalised community," comprising people who identify as female, male, genderqueer and trans; people of diverse sexualities; differently abled people; migrants; and people of many different nationalities.