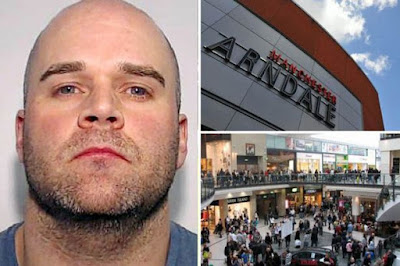 A sex-pest police officer has been locked up for secretly filming up the skirt of a teenage girl in Manchester's Arndale centre. Aidan Thompson, a married GMP constable, was caught on security cameras at the TK Maxx shop 'stalking' a 17-year-old for up to 40 minutes, manchestereveningnews.co.uk reports.

He followed her and then filmed her with a camera, which was hidden inside a plastic bag with a hole in it, a court heard. He also took footage of another young woman when he was called to investigate a serious sexual attack against her flatmate. The 35-year-old police constable was jailed for 14 months by a judge at Preston Crown Court on Monday. He is believed to be suspended from duty with Greater Manchester Police and will be dismissed.

His wife, family and colleagues were said to be staggered at the behaviour of the otherwise dedicated policeman. Investigators also recovered footage from Thompson of women undressed in changing rooms and even from the locker room of a police station. Thompson, from Stockport, admitted two counts of misconduct in a public office and outraging public decency at an earlier hearing.

Passing sentence Judge Mark Brown, Recorder of Preston, told him: “You not only have let yourself down, you have let the police service down as well. “Hardly surprising that this sort of conduct should undermine so significantly the confidence people have in police officers. “The offences were committed for a very simple reason - you had an unhealthy interest in these young women, you wished to gain sexual gratification by filming them and that was what you were determined to do.

“I have come to the conclusion I would be failing in my public duty if I did not impose upon you an immediate sentence of imprisonment.” Francis McEntee, prosecuting, had told the court that Thompson had been called to a flat to speak to a young woman whose flatmate had suffered a serious sexual assault. While securing the crime scene, on duty and in uniform as crime scene investigators began gathering evidence, he engaged in 'chit chat' with the woman as she got herself ready to go for a night out.

After getting changed she emerged wearing a short skirt and off-the-shoulder top, and Thompson secretly filmed her thighs with his mobile phone while they chatted. The recording was only discovered after Thompson’s arrest months later on the evening of October 6, in the Arndale Centre in Manchester. He had been recorded by security cameras at the TK Maxx shop for up to 40 minutes 'stalking' a 'striking' 17-year-old girl wearing a short skirt.

On CCTV shown to the court he was seen following her at a distance as she browsed aisles, before he used a plastic bag with a hole in it to film her, sometimes coming closer to swing the bag under her skirt. He was also seen to take the camera out and check the screen. Police were called and he initially denied wrongdoing, telling the arresting officer: “Listen, I wouldn’t do anything so stupid, I’m a cop on E Division.”

But when police searched his home they found computer equipment and more surreptitious recordings. These included filming a young woman in underwear in a changing room, the backsides of girls in tight pants and a bizarre recording from a police station with Thompson fiddling with a leotard hanging in the locker room. None of the victims were aware they were being filmed. The girl in the Arndale Centre later told officers: “If you can’t trust a police officer, who can you trust?” Bernadette Baxter, defending, said Thompson suffers some psychiatric difficulties, would lose his job 'imminently' and suffered 'shame and ignominy' as a result of his behaviour. GMP declined to comment on the case.