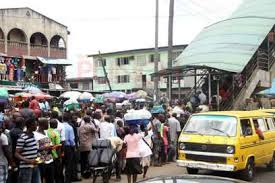 For several months, the new Ojota pedestrian bridge was almost 'begging' for 'patronage' due to peoples' preference for 'short cut' to use the deadly express road. They gave various excuses, ranging the steep climb to the time it take to come down the other end for 'abandoning' the footbridge, allafrica.com reports.

But last month the state government constructed an iron-fenced barricade to prevent recalcitrant pedestrian from crossing the express road as well as stationed combined teams of security men at the facility in order to monitor compliance. Hithertho,Governor Akinwunmi Ambode's campaign for the use of footbridge,especially in the ever-busy Ojota is paying off as scores of passers-bye now use the facility with some measure of discipline.

For instance it is now a norm to queue when using the foot bridge,whose stairs have now been demarcated with iron to aid movement of pedestrians and prevent stampede. But the current arrangement in Ojota is now a brisk business for the business-inclined ones as they now use the long queues to either sell or advertise their wares in late hours of the day when security operatives might have left.

Among the 'beneficiaries' of the new arrangement are petty traders,who sell soft drinks ,water,gala and other edibles. Some of these traders 'overlap' from neighbouring bus garages when there is lull in business to sell edibles to pedestrians queuing to ply the bridge. Shoe menders are also not left out of the benefits created by the new arrangement in plying Ojota bridge. They are more in number under the Ojota and ready to provide services to pedestrians using the bridge.

The long queues of pedestrians at the Ojota footbridge has also attracted beggars,corporate beggars and street urchins who seek alms to survive. They beseech their 'donors' and sometimes fabricate or concoct stories to make people part with their tokens. For advertisers,marketers and employment agencies,the pedestrians queues at Ojota is a ready made market to hook their target or restrategise. They do that through distribution or circulation of handbills or pamphlets among the pedestrians on queue. Besides,commercial bus drivers now use the exit and entry points of the footbridge as terminus to either drop passengers or pick another ones.The conductors are there in large numbers 'dragging' passengers with their skills.