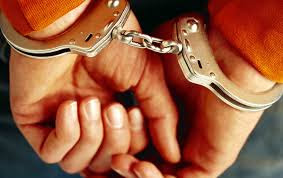 A 32-year-old Nigerian is in the grip of the Tema Police for allegedly registering in the recent Electoral Commission (EC)’s Limited Voter Registration exercise. The man, Evangelist Vandal is reported to have taken part in the exercise ably aided by a Ghanaian, Solomon Kpakpo Addo who served as his guarantor, myjoyonline.com reports.

Police officials said Vandal was arrested on May 12 following a complaint by a lady who alleged he has stolen her phone. Whilst interrogation was on-going, the police spotted an indelible ink on his finger resulting in a probe to find out how he got it. At the end, Vandal confirmed he took part in the recent EC’s Limited Voter Registration exercise with the aid of Addo, Public Relation Officer of the Tema Regional Police, ASP Juliana Obeng told Joy News.

She said considering the information the police have acquired from Vandal, “It became prudent for us to continue further with the investigation. ”Vandal disclosed he thought “staying in the country for six months makes him a Ghanaian hence the need for him to go take part in the recent registration.” He is currently in the custody of the police alongside his guarantor Addo. They are both presently being prepared for court, ASP Obeng disclosed.

The police have charged the two for “Registering without qualification which is contrary to the Regulation 28(1A) of the Public Elections Regulations Act and giving false information to the Electoral Commission officials which is also contrary to the Legislation 28 (1E) of CI 91 (2016). ”She advised foreign nationals in the country to be mindful of what they do since “The laws of the country work.” She also called on Ghanaians who are aiding some of these foreign nationals to ‘steal’ Ghanaian identity to be wary since the law frowns on such acts.

The EC’s Limited Voter Registration exercise was opened from April 28 - May 08 to enable Ghanaians who have turned 18 years and more an opportunity for them to regiser to have their names added to the electoral roll ahead of the November 2016 polls. However, foreign nationals were not permitted to take part in the exercise, a failure of which attracts some sanction under the Ghanaian laws.