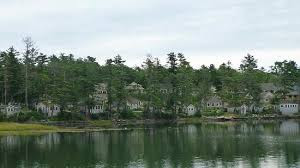 Edgecomb selectmen and the proprietor of the city site's area name came to concurrence on an adequate cost for exchanging possession to the town. On Jan. 4, Select Board Chairman Jack Sarmanian reported Stuart Smith consented to exchange responsibility for space name to the town for $1,196.

In late discussions with Sarmanian and Planning Board Chairman Jack French, Smith consented to exchange the space name's possession to the town. Smith had already presented a $1,196 bill for a long time of site expenses.

Smith figured the site's expenses at $299 every year. He consented to exchange proprietorship after he's paid $1,196, as indicated by Sarmanian and French.

The selectmen voted 3-0 Monday to draft a letter demonstrating an article would be put on the May town meeting warrant asking for financing. Yet, French demonstrated Smith needed to a greater extent a promise from the town. He talked with Smith Monday evening before the selectmen's meeting.

French reported Smith expected a promissory note tying the town to pay him $1,196 by July 2, and accept all money related obligations regarding the metropolitan site. French, who is a legal advisor, drafted an assention determining Smith's desires and submitted it to the selectmen for endorsement.

"A warrant article isn't going to fulfill him," French said. "He is searching for a guarantee from the town. He is willing to turn over the area name now, and acknowledge installment in July. I trust it's a win big or bust suggestion."

The selectmen rejected marking the promissory note. The board trusted Sarmanian's letter was all the better they could do.

"It is extremely unlikely we can do that. We can't accept all monetary obligation without voter endorsement," said Selectman Jessica Chubbuck. "He (Smith) comprehends our restrictions as a board. At whatever time I've addressed him he's been friendly and more than willing to offer us with our site some assistance with issueing. I'm certain a letter will suffice."

Smith started edgecomb.org in 1999 when he was an arranging board part. He kept on working the site and held the area name's proprietorship from 2009-16 amid his residency as a selectman.

Smith lost his offer for a fourth term last May. He has not been repaid for the site operation since 2013, as per town authorities. A year ago, he presented a bill for as far back as four years of operation.

Selectman Mike Smith approached the site council for different options if the town couldn't achieve concurrence with Smith for the space name. The board favors holding the space name "edgecomb.org" in light of the fact that it gives coherence to people in general and dispenses with conceivable disarray.

"It might take five months for people in general to locate the new site in a Google look," said site board of trustees part Don Kroitzsh. "What's more, it's truly not exceptional to offer a space name, either."